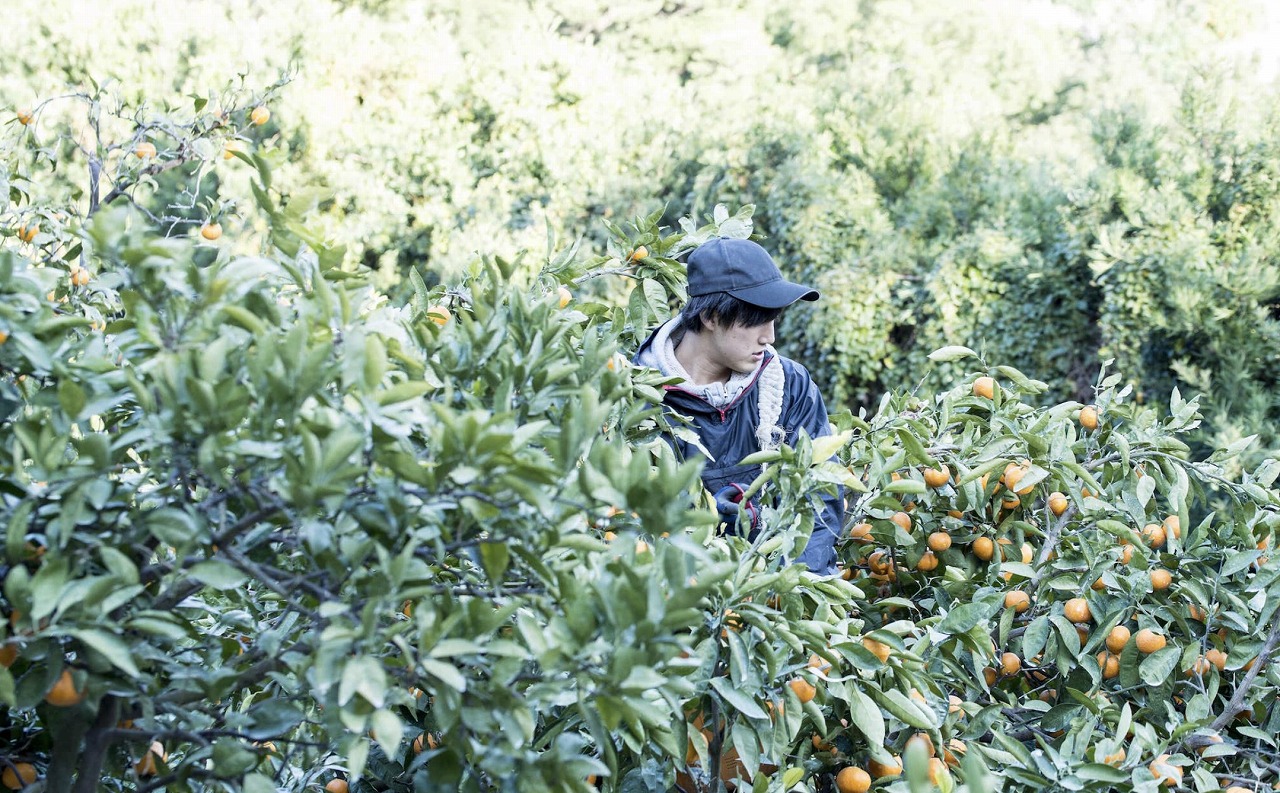 Mr. Inoue is a farmer of Tamura Mikan(orange) in Arita, Kishu, Wakayama. He is the seventh generation of Zenbee Farm, which has been in business for over 200 years since the Edo period.

He is actively involved in the revitalization of the local community through activities to promote the “mikan” and the establishment and operation of the “Kike Waku Waku” community center.
http://zenbeefarm.jp/

1 The purpose of Kinan Art Week
-What is the relationship between art and the community? –

Mr Yabumoto:
Nice to meet you.

Mr Inoue:
It’s a pleasure to meet you too.

Mr Yabumoto:
Thank you for taking the time to visit us today.

I run a law firm with offices in 18 countries around the world, and at the same time. I run a foundation that supports and subsidizes contemporary art in rural areas around the world. After 10 years of running my own company and foundation, I wondered why I wasn’t working in the countryside where I came from, and when I looked at the Kinan region objectively, I realized how bright and glossy it is. So we have been planning and promoting ‘Kinan Art Week’since last April.

After living abroad for the last ten years and the development of Japanese companies abroad, I feel that the most important thing for the maintenance and development of the region is to‘export’. I am particularly interested in the primary and secondary industries of the region which are inseparable from the land. In that sense I am very interested in local agricultural leaders like Mr. Inoue, and that is why I contacted you.

Mr Inoue:
Thank you very much for your kind offer.

Mr Yabumoto:
When I asked people questions in the region, I heard many people answer with, “It’s Mr. Inoue.” I myself think that the region itself will basically remain as it is and that there is no need for any sudden changes. However, from the point of view of the maintenance and development of the region, I think that we need players who can export, even if it is only 1%. In particular, I am wondering if we can do the same in Kinan that contemporary artists in the countryside in Combodia and Sri Lanka have been doing.

I myself think that the definition of‘art’is ‘if it moves you, it is art’, and I am sure that if we delve into local events, we may find something universal that moves people all over the world.

Mr Inoue:
Art…, I wonder what it means to be moved.

Mr Yabumoto:
There are contemporary artists in Cambodia and Laos, but it’s not easy to find people who are willning to buy contemporary art in the domestic market. Fortunately or unfortunately, we have to make it strong enough to suddenly export to the whole world, and we have to export to survive. This is an initiative to begin exporting to a market of over 7 billion people, and to have people who are impressed and sympathetic enough to buy at maximum price or value.

I think what the artists are doing is just trying to find out what is happening locally. I feel that if you go through local events and extract the essence of them, you will find something universal- something that people all over the world can relate to.

So local products and specialties, if they are properly contextualized and pushed through from the point of view of history and culture, etc., we will probably be able to gain‘sympathy’from people all over the world. I believe that people want to get things and events that have moved them, and they will buy them at any price, and I think that’s the way the world should be.

Mr Inoue:
But in any region, it is difficult for only one person to do something different.

However, what will happen to the countryside in the future is that the population will decrease and domestic demand will shrink. Domestic demand in Japan as a whole will also shrink. Then, along with the contraction of domestic demand, poverty will probably follow. If this happens, we will have no choice but to rely on countries and cities that have large domestic demand. If we do that, we may not be able to maintain our uniqueness as a region. Based on my experiences in Cambodia and Laos,I really think like this. I believe the only way to avoid this is to‘export’, and not just to a specific country, but to export the best value of what the whole world wants. If we can do that, then we don’t have to be dependent on any one country or city, and if there are more countries, cities or countryside areas like this, I believe the world will be more balanced and remain in relative peace.

Mr Yabumoto:
Yes (laughs). Maybe you can achieve this, and this is a universal theme for 7 billion people, isn’t it? Thinking about world peace through ‘mikans’ may be the starting point.

2. Introduction of the history of Zenbee Farm and Mr. Inoue’s activities
– We want to maintain and develop the Zenbee Farm, which has been in existence since the Edo period. –

Mr Yabumoto:
Zenbee Farm has been in existence for a long time, hasn’t it?

Mr Inoue:
Yes. We know from past account books that the first Zenbee was founded in the Edo period (1603-1868). Starting from 1803 and I am the seventh generation. We started from a small field and now the area is more than three times as large as it was then.

Our current crops are lemons, hassakus(thick-skinned oranges), loquats and mikans(mandarin oranges).
The Arita area is characterised by its terraced fields and proximity to the sea.
Among them, we produce in an area called‘Tamura’, and the mikans from this area are branded as‘Tamura Mikan’.

Mr Yabumoto:
Field and sea- exactly what Kinan Art Week is all about! Closely related to the ‘culture of seclusion’ and the‘culture of ports’!

Mr Inoue:
Yes, we do. We also produce an original product called‘Etto Beni’ which has a red skin.
This is Zenbee Farm’s top quality mikan, grown one by one in bags.

Mr Yabumoto:
These are the best mikans ever, they sell out in a day!

Mr Inoue:
That’s right. It takes a lot of time and effort to produce them.

We have had a lot of media coverage. We think it’s important to disseminate information, and we do this ourselves through social media.

Mr Yabumoto:
They’re also sold to individuals, so-called ‘B to C’(business to consumer).

Mr Inoue:
That’s right. Most of the mikans in this area are sold through middlemen, but with market distribution, we don’t know exactly who is eating them. We wanted to hear from the people who eat them, so we started selling directly to consumers, Not in a way that we sell directly at the market, but we wanted people to come to Tamura if possible.

That’s why we created a place called ‘Kichi Waku Waku’. This has brought in university students from all over the country. Then these students participate in local festivals,etc, and from there, various people will be connected to one another regardless of production area, roles and age, etc., and I feel that‘the circle of mikans’is expanding.

Mr Yabumoto:
On your website, it says that Mr Inoue’s ‘ambition’ is to ‘deliver delicious mikans’.

Mr Inoue:
Basically, I believe that they have to taste good first. It’s a sensory thing.

I think they are delicious when they are sweet, but also sour. They have their own unique taste, or you could probably say, their own character.

Mr Yabumoto:
Is it like the ‘terroir’ of wine? If so, what is the terroir of Tamura?

Mr Inoue:
Although the terroir of each region has not yet been established for mikans like it has for wine, I believe that Tamura has its own unique terroir. There are blessed forests, sea, and river resources nearby, and although I can’t express it in words yet, I think there is something like a unique flavor and taste that only Tamura Mikans have.

We want to bring them directly to consumers and make them happy and even moved through Tamura and Zenbee Farm’s mikans.

Mr Yabumoto:
If you say “moved”, then surely mikans are art, and you are an artist?

Mr Inoue:
I hadn’t really thought about it, but I suppose I could be.
The production of mikans is completely different depending on the land and the farmer. Each farmer’s experience and passion for their work comes out in their mikans.
But it’s not the same every year, the weather can be very unpredictable.
The only result is that the mikans are there.

We can grow and harvest them only once a year.
So, even if we do this for 30 years, it means we can only do it 30 times.

And even if we do that far, the recipient may not even notice the difference in taste from each harvest.
We have to do what we believe in.
I think it’s a very artistic thing to do.

4. Are mikans a symbol of peace?

Mr Yabumoto:
With over 7 billion people in the world, I’m sure there are different definitions of ‘delicious’.
For example, when I asked a European person to give Japanese fruits as a birthday present, I was once told “Oh, thank you, but Japanese fruits are too sweet, so I only want to eat them in Japan.”
So, on the contrary, it seems like they are too sweet for them.

Mr Inoue:
Our mikan is like that too (laughs)

Mr Yabumoto:
Then we might have to think from a more fundamental point of view: ‘What is a mikan? ’Beyond the technical and taste aspects, we would like to have a dialogue on fundamental questions such as ‘Why do people eat mikans?’ ‘Why did people in Wakayama start growing mikans?’ ‘Why are mikans always on Japanese tables?’ ‘What does it mean to eat delicious mikans?’
I feel that this dialogue will lead to the globalisation of the Tamura Mikan.

Mr Inoue:
In this sense,‘mikans’can be shared with everyone fairly. It is an interesting fruit. Maybe it’s a fruit that is supposed to be shared with everyone. That’s why many Japanese people, and not only Japanese people, but people from all over the world ‘sympathize’ with them, and they can be found on family tables around the world.
Nowadays, we may be living in a world where we are fighting for our share, but I want to think about the very essence of ‘sharing’ through ‘mikan’.

I want people to think that if you go to Japan, you must eat ‘mikans’, which are symbol of peace and sharing, and not just view them as ‘oranges’.

Mr Yabumoto:
That’s quite an interesting perspective. Right now, I feel that the value (sense) of Mr. Inoue and the mikan fruit has increased dramatically. As the word says,I think ‘high value’ comes from, ‘high sense of value’.
I would like to start by delving into what it means for people to eat mikans, not only in Japan but also around the world. I believe that this will bring Tamura and the world closer together.

Thank you for your time today! It would be great to talk to you again.

Mr Inoue:.
Thank you very much!