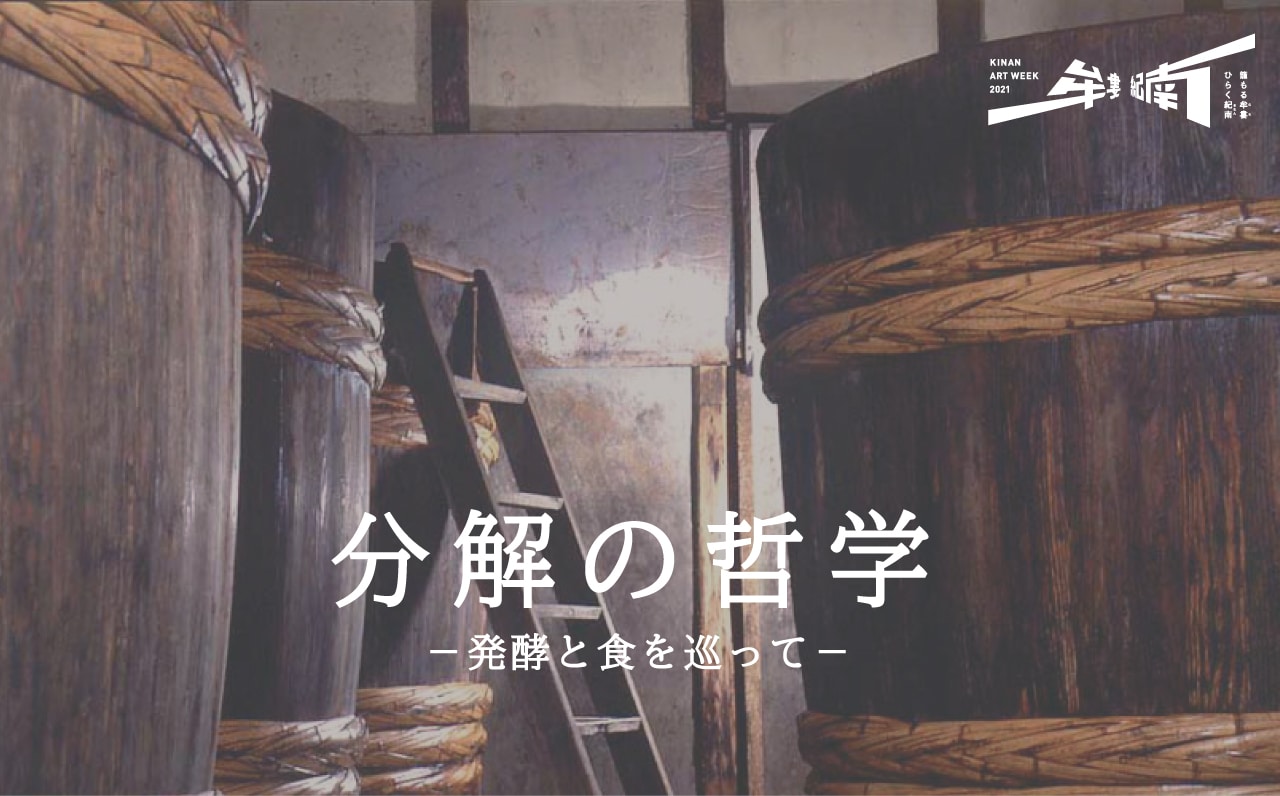 – On Fermentation and Food

In the present time, we live in a world where the focus is on the power of “production”. It is a world where “decomposition” is neglected. In my home town of Kinan in Wakayama Prefecture, I had the opportunity to talk to one of the fishermen whose numbers have considerably dwindled. I can’t help but feel the strain of too much “production”, partly due to the development of aquaculture techniques. One of the reasons for the long deflation in Japan may, in fact, be the over-investment in the “production” system. On the other hand, in the Asian cities where I have lived for many years, I have witnessed a situation where no matter what else decomposes, only concrete buildings and cars have been increasing.

The importance of this “decomposition” is explored in the book “The Philosophy of Decomposition: Thinking about decay and fermentation” by Tatsushi Fujihara. The key phrase “sustainable recycling society” has been used in many places in the world. In order to think more deeply about the “cycle”, the concept and philosophy of “decomposition” is important, but this book warns us against a world that focuses only on “production” and neglects “decomposition”. The book casts a warm gaze at not only micro-organisms, which are often associated with “decomposition”, but also at the “decomposers” who sometimes work as the dark side of society, such as insects, animals and the scavengers and cleaners of human society. The detailed description of the “decomposers” is left to the book, but this book will help us to understand that the “decomposers’ point of view”, and the perception that humans are the bearers of the “decomposing world“ are both important for the construction of an organic and highly recycling society.

One important subject for the philosophy of “decomposition” is “fermentation”.

In the book “Fermental Cultural Anthropology” by Hiraku Ogura, it is stated that “fermentation is a process in which useful micro-organisms are at work”. In other words, it is a process of “getting eaten” by micro-organisms, the most flourishing “decomposers” everywhere in this world, such as in the air, soil and the body.

Wakayama Prefecture is a place which has various theories about “the origins of Japanese food”, and the reason for this is closely linked to the roots of fermentation culture, such as in the production soy sauce and soybean paste (miso). The fermentation process of soybean pastes and soy sauce involves keeping rice malt (koji)in a chamber (muro). It can also be said that it is the process in which the fermenting mold most actively “eats” the soybeans, and the soybeans “are eaten”, while they are secluding themselves in a chamber.

Coincidentally, the Kinan region is also known as “Muro District”. According to the book “Kumano Sankai minzokuko” (A treatise on the mountain and coastal folk customs of Kumano)  written by Kan’ichi Nomoto, the name “Muro” (牟婁） comes from the word “muro” (室), which means a ‘place’ (chamber) where the gods lived, and is said to come from the lineage of Kumano. In Muro, human beings too, can become a catalyst for the creation of “decomposers” who will transform the world of production supremacy by “secluding” (fermenting), just as the earthworm demolishes the surface of the world.

Today, Horikawa-ya Nomura is the embodiment of this fermented culture.[1] According to Keisuke Nomura, the 18th head of the Nomura family, he intuitively feels that there are similarities between the “fermentation of soybeans” and the “deep disintegration of the inner world in which they live, while humans are secluding themselves”. This point will be elucidated in the Kinan Chemistry session.

“ ‘Cooking’ and ‘eating’ are aesthetic acts that deserve to be called so, even if they are repeated every day.”

These are the words that appear in the afterword to the book “The Nazi Kitchen: An Environmental History of Eating”  by Tatsushi Fujihara. In the book, Fujihara uses Kafka’s “A Hunger Artist” subject to denounce the aesthetic degradation of “eating” and “food”.

The importance of Japanese “koji mold” (rice malt mold)in the context of food in an age when products such as “10-second charge” (quick energy food) are sold in convenience stores in large quantities, and the magnitude and visual beauty of its presence, is fascinating. The mold is a micro-organism that “eats” dead organisms, with a powerful “decomposing” power that can break down objects that ordinary fungi cannot. Their powerful “decomposing” power paves the way for other fungi, and they are like the link between the world we see, and the invisible world of microbes. Sometimes, through sake, soy sauce or food, they even connect man with God[2].

Now, is it dirty to eat and kill decaying creatures and devour dead bodies? No. Isn’t the “feast of the corpse” by far the most magnificent, stunning and beautiful thing?

From a passage in Macbeth, Shakespeare

The brewer or cook who interacts with the “sacred decomposer” is also a “decomposer”, as is also the person who “eats” the “decomposer” itself every day. By re-considering the “beauty” of the multi-layered “decomposition” of the food chain – “cooking”, “eating” and “being eaten” – we can give a real meaning to the term “sustainable, recycling society” that has become so familiar.

[1] Horikawa-ya Nomura, born in 1688, was a shipping wholesaler whose function was to transport the Kishu clan’s goods to Edo. One day, however, the ship drifted and washed up on the island of Etorofu, where is now Hokkaido. As a result, the business of the shipping wholesaler was forced to close, but he developed a soy sauce and miso brewery, and it continues to the present day. The tradition has been maintained for 400 years using hand-made methods. For more information, please visit: https://www.horikawaya.com/08history/