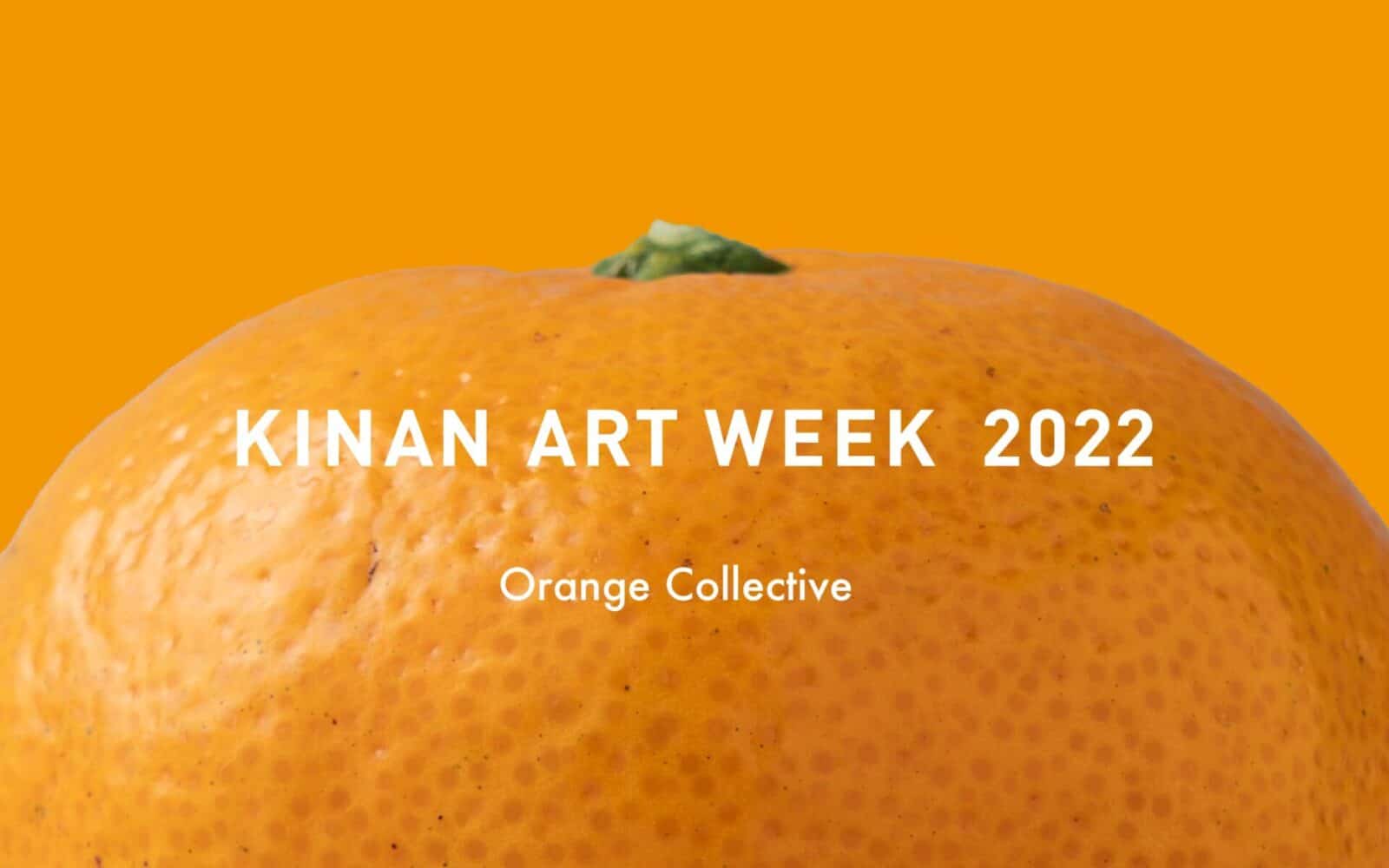 Orange Collective: From Mikan and Spiritual Traditions in the East, to the Orange in the Global Market

The “Orange Collective”–a take on the term “Artist Collective” –will focus on the Kinan region’s specialty, Mikan (Japanese mandarin oranges), and will gather people from different backgrounds around it to exhibit their work. It is also an attempt to examine mikan from a cultural anthropological, historical, and other unique personal perspectives. This collective is an extension of the Kinan Art Week festival held in 2021, and our continuous attempts to increase the number of contributing friends not only from the region but also from around the world in preparation for the next festival in 2024.

1 Tachibana, the Origin of Japanese Citrus Around Wakayama – Mythological Perspective

In the Wakayama Prefecture where the Kinan region is located, there is a shrine called the Kitsumoto Shrine, which is known for Tachibana, the original Japanese citrus, and is dedicated to all kinds of Mikan (oranges). In the Kojiki, the oldest existing record of Japanese history, Tajimamori, an envoy of Emperor Suinin, was told to retrieve the Tachibana for the emperor’s longevity. So, he brought it backfrom Tokoyo, the underground world. On his return, half of the Tachibana was planned at the site of the Shrine.  In addition, Tachibana appears in the myth of Izanagi and Izanami, the central brother-and sister deities who created the eight islands of Japan in the Kojiki, in the Ototachibana Hime myth about the wife of a mythical Japanese prince called Yamatotakeru, as well as in the Nihonshoki(“The Chronicles of Japan”).

In the Izanagi-Izanami myth, the word Tachibana appears in the pre-purifying rite before Izanagi performs his misogi–ablutions on his return from nether world Yominokuni. After purifying himself, Izanagi gives birth to Amaterasu, the goddess of the Sun, through his left eye. Amaterasu, popped out from the left eye–is Tachibana, the fruit, popping out of the buds of the Tachibana tree, reminiscent of that? Additionally, could the relationship between the Tachibana as the origin of Japanese citrus and other Mikan derived from it be described as like the relationship between Izanagi, the father and country-creator deity and Amaterasu, Izanagi’s daughter, the Sun goddess?

We will also examine Mikan from the perspective of the history of domination and control. In Kumano, Susonoo, Amaterasu’s younger brother in the Kojiki, known as the God of storms and exorcism, is worshiped. This contrasts with Ise in Mie prefecture, where his sister Amaterasu is worshiped. Susanoo was eventually banished from the land and sent to the underworld after he had a quarrel with his sister. The quarrel initially started from his jealousy toward her. Based on this, we could say that we grow Mikan as the main agricultural product in this Kumano area where Susano has been worshiped but receive benefits from this fruit which is perhaps connected to Amaterasu. Furthermore, even outside of Japan, such as in China and many other Asian countries, there is still a custom of distributing oranges to close friends during the New Year, which we could say is closely related to the history of domination and subjugation.

The Orange Collective is also an attempt to increase our understanding of the “orange”. Citrus fruits, such as oranges and mandarins, are fruits that have always fascinated people. They stimulate romance and imagination beyond the sense of taste, sight, and smell.

– The orange, which can flower and bear fruit at the same time, appeals to both the taste buds and the intellect, and thus represents the tremendous fertility of nature and the generosity of God to man. (snippet）

Also, and perhaps most importantly, because of the round shape of the orange fruit and its color, the orange tree is a symbol of the sun. This has to do with its existence as the Christian sun.

From Pierre Laszlo, “The cultural history of citrus fruits: history and human relations”.

According to the book Oranges: A Global History by Clarissa Hyman, the orange originated on the islands bordering the ancient Asian and Australian continents before they split apart millions of years ago. The word “orange” is said to originate from the ancient Indian words “naranga” and “narangi”, which in Sanskrit means “inner fragrance”. The orange developed its diversity in the secluded world of the Himalayas, in Southwest China, Southern India, and Southern Burma, and the citrus fruits which originated in Asia gradually spread to the rest of the world via Arabia, the Nile, and Central Asia. In the European world, the exotic value of the citrus fruit was discovered and was exported all over the world as a symbol of God, love, and wealth. It is this context that makes citrus fruit the embodiment of Kinan Art Week’s theme of “seclusion” and “opening”.

The orange tree also has the unique feature of producing white flowers on its branches and, at the same time, golden fruits. The white flowers give the meaning of ‘purity’ and the golden fruit of ‘fertility’. In paintings, such as “The Madonna of the Oranges” by Cima da Conegliano and Gaudenzio Ferrari, the orange is a symbol of the Holy Mother who symbolizes both purity and motherhood. It is also a symbol of nature and fertility in the painting expressions of great artists such as Botticelli, da Vinci, Cézanne, and Matisse.

Moreover, for Matisse, the orange seemed to be more than a food or a symbol. According to the art critic Adrian Searle, Matisse sent an orange once a year to Picasso, an artist he admired and rivaled. According to an anecdote, surprisingly, Picasso did not eat the fruit, but he just put it on display to admire it as “Matisse’s orange”. Why don’t you join us in finding out what this means?

3 What is the Orange Collective?

The word “collective” means a group or community. There are various definitions of “collective” but based on my experience of working with artists and collectives across Asia, I believe they are characterized by: (1) having a common ideology, purpose, and values, (2) gathering a loose group of people with different skills and backgrounds, and (3) conducting a collective practice that is widely connected to the outside world.

The word “collective”, which I have used here, was originally not verbalized, but has been practiced spontaneously in traditional events such as festivals, and in the gatherings of regular people who clean shrines, temples, churches and so on. However, the custom of communities and “commons” are disappearing today. Thus, the concept of “collectives” is gaining more recognition and value. In the art world, the Indonesian artist collective “Luang Rupa” has been selected as the Artistic Director of documenta 15, a famous contemporary art exhibition to be held in Germany this year. This means that the idea of the collective has been expanding and becoming more prominent.

This time, we will add “Orange” to the core of the socially generalized concept of “artist collective” in addition to “art” and “artist”.

One of the implications of this is that from a de-anthropocentric point of view, the “orange”, rather than the human, is the main focus of this perspective. Humans have continued to degrade ecosystems and the environment by extracting from nature and the environment too efficiently, in order to secure their own profit. Reflection on this has led to a worldwide movement to recognize the rights of non-human subjects. In the world of art, it is becoming increasingly important to consider the artistic history of non-human organisms (for example, the artistic history of the panda, or the plum tree). From this point of view, it is necessary to think about the “artistic history of oranges” and to reconsider the world and society from the perspective of oranges.

A second implication is that of an attempt towards “deterritorialization”, namely, a kind of “art-centrism”. What I felt in working with the collective in Asia was the freedom of concept and broad mindedness regarding “art,” which is different from the position of “art” in Japan. We would like to introduce this “standard of art” in the Asian region to Kinan, Japan, and the rest of the world. For instance, Kenji Miyazawa raises issues for professional artists and advocates for the importance of deterritorialization and the transmissibility of art in his Introduction to Agricultural Art. Based on this perspective, we working with the farmers of the Kinan region, have decided to reaffirm that the creative activities of culture and art are closely related to the production activities of primary industries such as agriculture, that is, that “agriculture is a creative activity in which people live in harmony with nature,” and that farmers are artists who co-create with nature. Therefore, we will carry out collective practices together with artists, researchers, private companies, government officials, educators, and others.