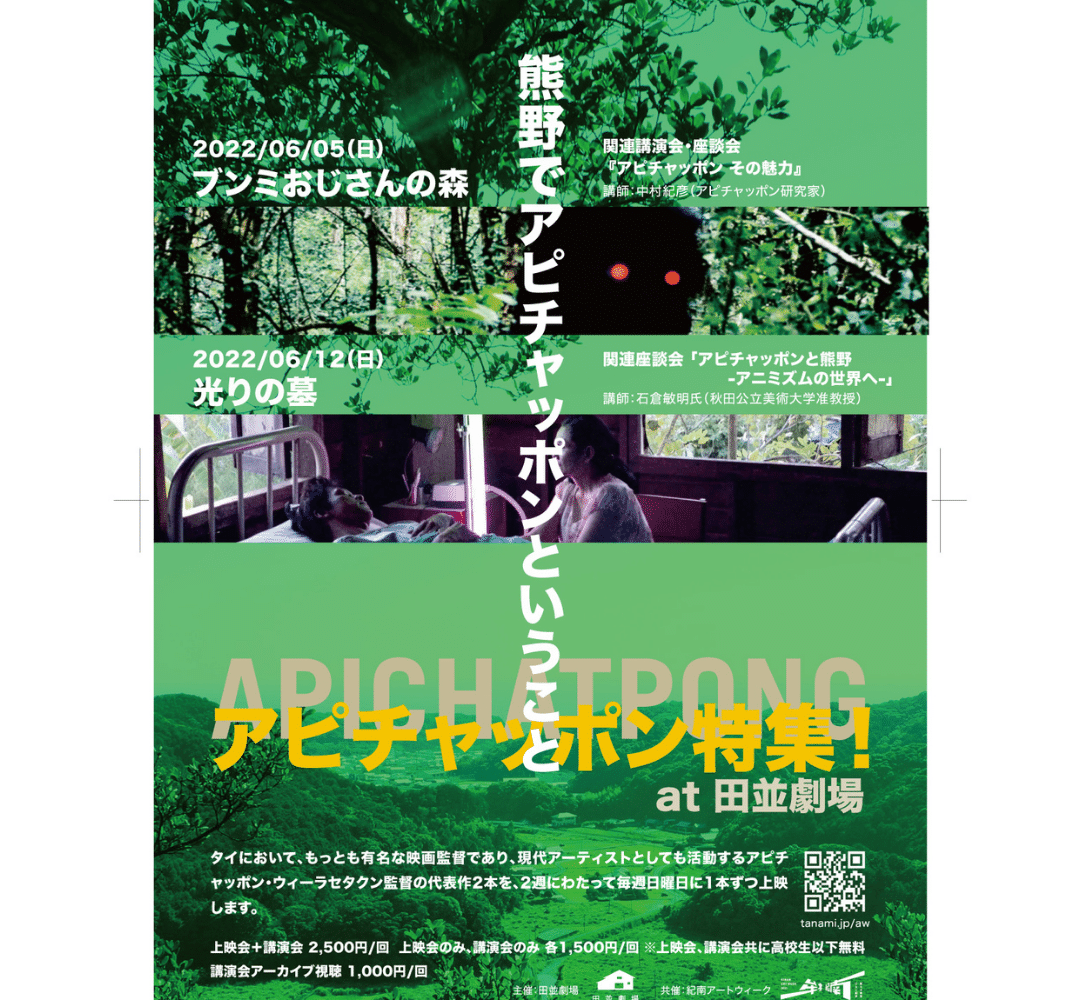 Apichatpong and Kumano at Tanami Theatre

Sun. June 5th : Screening of “Uncle Boonmee Who Can Recall His Past Lives”13:00 -
Post-screening lecture and round-table discussion session (1) 16:00 -

Two of the best-known films by Thailand’s most celebrated film director and contemporary artist Apichatpong Weerasethakul will be screened,each one every Sunday for two weeks.

Apichatpong Weerasethakul exhibited ‘My Mother’s Garden’at the Tanabe City Kozanji venue during Kinan Art Week 2021 in Tanabe and Shirahama,Wakayama Prefecture in November 2021, and a number of people may have been seen his work.

Apichatpong Weerasethakul’s new film ‘Memoria’, which won the Jury Prize at the Cannes Film Festival last year and was awarded four Cannes titles, has been on show in Japan since this March. Apichatpong Weerasethakul is attracting international attention as a filmmaker and contemporary artist, but there is almost no opportunity to experience his work in rural Japan. However, Apichatpong Weerasethakul’s interest is focused on the so-called ‘periphery’,‘other worlds’ and ‘spirits’. Why not have a formative experience to discover the charm and individuality of Kinan and Kumano and to transmit their value to the world through the internationally recognised works of Apichatpong, who has presented his works from the provinces of Thailand?

[Schedule]
Sunday 5th June 2022
Screening of “Uncle Boonmee Who Can Recall His Past Lives”13:00 –
Post-screening lecture and round-table discussion session (1) 16:00 –

Content: the lecture will also serve as an introduction to ‘the Apichatpong month’. The main aim of the round-table discussion is to introduce people who are not familiar with Apichatpong Weerasethakul to his past works and the appeal of his new films and other works. Norihiko Nakamura, Japan’s only researcher on Apichatpong, and Miyuki Takei, representative of the distribution company Moviola, will be invited as guests to discuss their appeal. Nakamura will also be asked to give a lecture entitled ‘The Apichatpong Weerasethakul Chronicle’ as an introduction to his talk.

Raised in Khon Kaen in north-eastern Thailand, he began making short film and video works in 1994 and completed his first full-length film in 2000. He has also exhibited and made installations in many countries since 1998, and Weerasethakul’s works are often non-linear, generate strong value inversions, deal with memory, and deal with personal politics and social issues.

Tanami Theatre is constructed out of wood and was built around 1950 in Tanami, Kushimoto, Wakayama Prefecture. It functioned as a local theatre until around 1965 when it fell into disuse and disrepair. The theatre was abandoned,but it was later restored as a local cultural facility over a period of four years through the ‘Tanami Theatre Restoration Project’, which was initiated in 2014.

It is now used as a multi-purpose cultural facility, with film screenings once or twice a month, live events and performances, a Tanami Theatre café, arts and crafts and hula classes, and as a place for cultural exchange where people can come together once again.