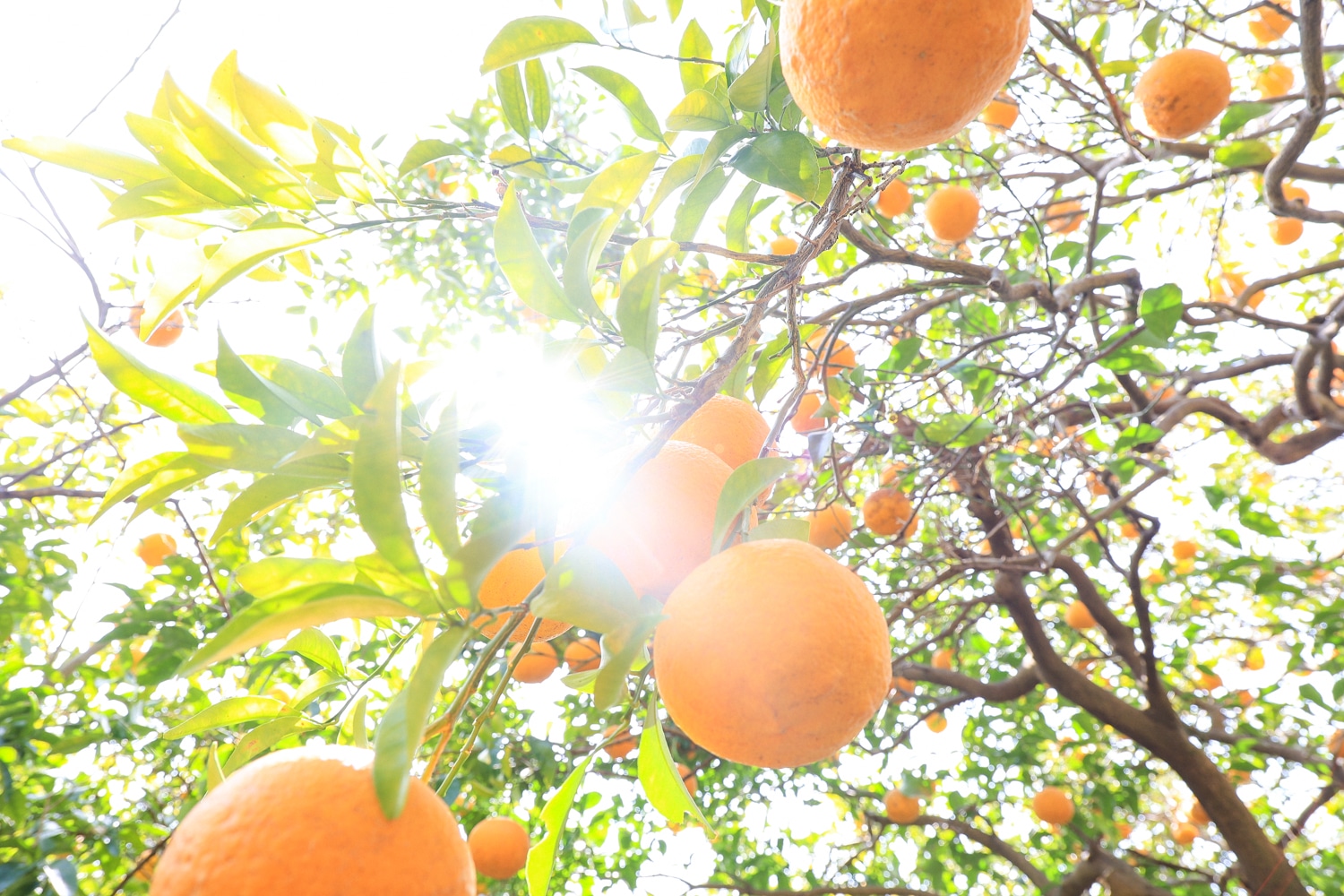 Orange ‘Democracy’ – What is Collectivism? –

1. Is the orange (mikan) a collective?

In the Kinan region of Wakayama Prefecture, as in other regions, the traditional and hereditary framework based on so-called ‘kinship’ is ‘liquefying’[2] due to a combination of factors such as municipal mergers, depopulation, and the development of the Internet society. In these dissolving communities, ‘art’ is needed to create and rebuild ‘new relationships’ that are different from those that existed before. The ever-increasing number of regional arts festivals is evidence of this background.

In recent years, the existence of art collectives has become increasingly important in rebuilding ‘new relationships’ through the arts, as evidenced by the fact that art collectives have taken on the role of artistic directors at important art festivals such as the Yokohama Triennale and Documenta. From the perspective of sustainability and viability, art collectives are a movement in which artists do not work alone, but as a team, and their collective subjectivity is seen as that of an artist. Based on past experience of working with artist collectives across Asia, collectives tend to (1) share common purposes, and values, (2) bring together a loose group of people with different skills and backgrounds, and (3) engage in collective practice while being in contact with the outside world at large.

This method for survival is a very natural methodology in the world of oranges.

Oranges(mikans) are some kinds of collective.

This is a phrase that particularly impressed us during our fieldwork with orange farmers in the Kinan region. The water and nutrients obtained by oranges are shared throughout, but the cells themselves are not transferred to the whole, as in animals. For example, the genes of branches that are grafted from outside are maintained as separate entities, as clones. From this perspective, the oranges, in which different entities cohabit but are integrated, are indeed a kind of collective.

2. Can there be ‘democracy’ in oranges?

Of course, it may be foolish to conceive of democracy in oranges. This is because applying human standards (human scale) to oranges can be seen as anthropocentric. For this reason, democracy in oranges is described as a different concept from normal democracy, as bracketed “democracy (or mandarin democracy)”.

First, how do the oranges described above (as a collective) think? In order to gain the perspective of the orange, I would like to apply Michel Serres’ theory of the ‘quasi-object‘ to the orange. The theory of the ‘quasi-object’ is a way of looking at an object that is a passive object (thing), but at the same time functions actively and autonomously as a subject[3]. If oranges are re-conceptualized as ‘quasi-objects’, the object (oranges) can be reconstructed from a subordinate relation to the subject (humans), rather than a dynamic consisting of multiple humans and oranges, or more specifically, multiple oranges through active interactions between oranges and oranges. In other words, like Bruno Latour’s ‘Parliament of Things’[4], it is possible to find public interest and sociality, such as ‘democracy’, in the myriad of ‘non-human things’.

Interviews with orange farmers in Kinan indicate that oranges do not have a coercive mechanism for restricting their freedom, such as humans enacting criminal laws, etc. For example, the roots of mandarin orange trees cannot take measures to prevent water and nutrients from being distributed to some branches, leaves, etc. Conversely, oranges always continue to take equal measures for the whole. Because they are always equal, the trunk and branches are always able to operate freely. In other words, the oranges cannot stop the trunk and branches from growing in order from the centre. This means that oranges are constructing a perfect ‘democracy’, with full guarantees of ‘equality’ and ‘freedom’.

As David Graeber states in “There Never Was a West: Or, Democracy Emerges From the Spaces In Between”, ‘democracy’ was not created in the western world, such as Athens in ancient Greece. It can be the wisdom for survival that has been created by nature, plants, and indigenous peoples who do not divide nature and people. In this ‘democracy’, the few do not have to follow the opinion of the many. Certainly, the branches of oranges that have grown too freely are dealt with according to the natural order of things, for example by gravity breaking them, but they are allowed to assert their own existence and judgement at all times as a positive argument. In fact, the original ‘democracy’ may in fact have its origins in plants such as the orange tree. The current democracy regulated by the nation-state is not an original democracy. There is a need to rethink freedom and equality from the perspective of the world of oranges.

Going further, public goods are important in reconciling ‘freedom’ and ‘equality’ in human societies. Public goods are goods that are consumed jointly by individuals, do not compete with each other, and can be used without the exclusion of any other person. For example, they can be called infrastructure or commons, such as rivers, public roads, firefighters, police, etc. Public goods have the function of regulating ‘freedom’ and ‘equality’ in the real world by agreement between the trustee and the truster. What are the central public goods in an ‘orange democracy’, which is a perfect ‘democracy’?

I believe that the ‘roots’ of the orange trees may fulfil the function of a public good. The Kinan/Kumano region of Wakayama Prefecture, a major production area for oranges, is known as ‘Nenokatasutsukuni’. Nenokatasutsukuni is a world described in the Kojiki (Record of Ancient Matters) as being deep underground, beyond the sea, and far removed from the present world, and is said to be a country which is presided over by the god Susanoo. The inhabitants of Kinan/Kumano have worshipped Susanoo, the ‘god of the earth’. A clue to answering the above question may lie in the ‘root’ of the orange trees, which cannot be captured visually and is shrouded in mystery beneath the ground.

In this respect, Plato compares our ‘head’, or ‘reason’, to a ‘root’[6] and Aristotle, in his ‘On the Soul’, states “The part, which in animals is the head, is the root in plants”. Thus, the place where the intelligence of the orange is recalled may be the ‘root’. Also, the philosopher Emanuele Coccia stated that “No living organism is more closely attached to the world around them than plants. (…details omitted…) In order to be as close to the world as possible, plants develop their bodies by prioritizing area over volume”. Plants, unlike animals, do not have sensory organs, but instead, embrace the world by spreading their roots throughout the ground. Oranges are in constant connection with the world through their roots.

For orange trees, the public good may be the root, which acquires its own state and the state of the environment in which it is immersed, and provides water and nutrients to the whole in an all-pervasive manner. And while recognising the world through the roots, the roots, branches, and fruits, etc. are collectively and organically optimised as a whole, as if they have a will, based on the idea of ‘survival of the species’. We intuitively feel that this overall optimization is largely due to the ‘roots’, and we would like to further deepen this hypothesis in the future activities of the Orange Collective.

3. Finally- what are the public goods of oranges and humans?

Finally, let us return to human society. Contemporary art practice is shifting its emphasis from aesthetic to social values, and collectives are becoming important actors in this practice. And beyond subject-object, we try to mix the ‘society of oranges’ within the ‘society of humans’. What exactly are the public goods that form the basis of ‘democracy’ in humans and oranges?

We who live in the Kinan region of Wakayama prefecture are descendants of the god Susanoo, who travels between the boundaries of the sky, the earth’s surface, and the underground, and are a collective of descendants who have continued to face the ‘root’. The future we are creating is both completely free and equal.

[4] Bruno Latour, translated by Kumiko Kawamura, We Have Never Been Modern