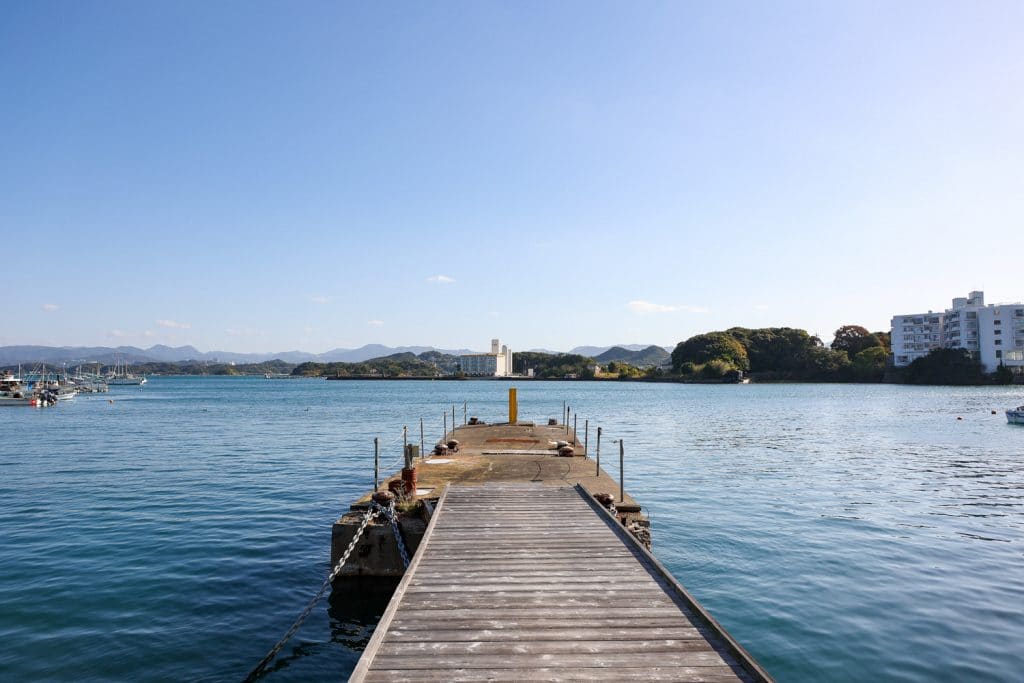 What flows in Nanki Shirahama

Nanki Shirahama is a tourist destination blessed with nature and many other attractive resources. It is known for its white sand beaches, where you can swim with tropical fish due to its year-round mild climate, thanks to the Kuroshio current flowing offshore. It has also been famous as a therapeutic hot spring since the Manyo period (710-794), and is a place where people gather to stay at hot spring inns and even come on day trips to enjoy the bathing facilities in the area.

The Hotel Koga-noi, a Nanki Shirahama hot spring resort, used to exist by a peaceful cove connecting the outer and inner seas, called Kogaura in Nanki Shirahama town, Wakayama. The artist Ai Kawano’s grandfather was the founder of the hotel and she spent summers at Kogaura during her childhood. Her neon sign board < I >, which used to shine on the roof of the hotel, was not only a work of art about her personal history, but also about the time and memories that flow in Kogaura.

Today, the hotel no longer exists. Nanki Shirahama is changing. Attractive tourist destinations are always affected by cities with huge domestic demand. Human and monetary flow, which can be described as horizontal, keeps changing the people, the names, nature, the capital and even the unseen spiritual presence of the places that receive them. The calm-looking cove of Nanki Shirahama was actually a fast-flowing torrent when viewed from this perspective.

– It evokes the unchanged memories of the people of Nanki Shirahama –

The full moon can be seen from the pier where the Showa Emperor disembarked from the sea when there was no train. The roots of Nanki Shirahama and its unchanging memories may be hidden in the water. In Kinan, a sacred place dedicated to Susanoo, also known as “the god of death” and “the god of water”, I continue to have an intuition that spirits appear from the water on full moon nights. Was the < I > a signpost for them? Perhaps they gathered at the < I > and looked up at the full moon from the water. The movement of the perspective that connects the surface of the water and the sky, the thought that makes the boundary between the surface of the water and the sky disappear–in other words, the vertical and mythical point of view and thought–might be important in considering flowing Nanki Shirahama.

–  What kind of place is Nanki Shirahama? –

< I > is surely like a tombstone and a signpost of memory and, like a lighthouse, a beacon that illuminates the present and the future. Starting from that guidepost, the memories, the people and the spirits blend gently and violently like waves, and spin a new story of Nanki Shirahama.

< I > – What flows in Nanki Shirahama - Commentary

When I came back to Nanki Shirahama after a long time abroad, I had an intuition that Nanki Shirahama is similar to Sihanoukville, the sea town of the Kingdom of Cambodia. This is not because of any cultural similarity in the natural environment, such as the sea view or in the characteristics of the people, but because of the similarity in their industrial structures. Tourist towns tend to be dependent on domestic demand, the movement of people and large capital in particular areas. In the case of Nanki Shirahama, I felt that it was structurally similar to the relationship between Osaka and Tokyo, and in the case of Sihanoukville, China. The old Hotel Koga-noi representing Shirahama Onsen has been replaced by a different brand, and the small hotels in Sihanoukville where I used to stay are no longer there. Change is not always necessarily dreadful and can rather be encouraged, but it is also tempting to get a little sentimental.

This immense domestic demand and regional ties generally create a kind of privilege between extraterritorial/foreign investors, regional influencers and politics/government. I think this is right for business in the short to medium term, and as a business man myself,  I often observe the strong ties created by such a model. This business model can be seen all over the world, in all types of cities such as Nanki Shirahama or Sihanoukville.

In this respect, Sihanoukville looks like a peaceful beach resort, but it is also the forefront of a landscape that is being dramatically changed by Chinese capitalists. The cove in Shirahama appears calm and peaceful from a distance, but looks different when you look within. When you talk to the aquaculture businesses near the cove, they say, “Calm? no, it’s not.” Perhaps Sihanoukville and Nanki Shirahama are places where waves and money come and go.

The flow of money and capital, as intangible tangible objects, is like an ocean current, fast and without boundaries. As capital is swapped, the landscape changes over time. Can the tourist areas continue to be swayed endlessly by the “horizontal” and “vertical” movements of the visible world of money?

2. The world of ‘verticality’ and ‘nothingness’ – the spirit continues to flow like a wave –

The horizontal, dizzying flow across borders and boundaries is probably secured by a certain economic rationality. However, the land or place that is shaken by this immense capital may lose its original features. Shouldn’t the tourist areas put up “vertical” stakes, influenced from the outside so that we may have a chance to revisit? It is the intention of Kawano’s exhibition to convey the importance of a kind of rethinking that moves from a horizontal to a vertical axis, creating a movement that is as if we are raising our own flag vertically to the heavens, advocating the idea of putting down our own roots and slowly starting to grow our own tree.

The second is to reconsider the concept of “nothingness” in order to see the world of money from a different point of view: that of thinking about the “spirit” as “non-existent (lost)” and “invisible (invisible)”, and the “small memory” that the “spirit” holds slightly. While escaping the curse of monetary society, I feel that it is important for “Nanki Shirahama to be Nanki Shirahama.”

In thinking about this, < I > performs a very important function. According to the artist, < I > is intended to be a tombstone that brings back memories of the past while playing a role as a lighthouse that illuminates the present and the future. The intuition I had on first seeing < I > was like a “disguised mask of the spirits’ corpse” for accepting the memories of flowing spirits, and an advertising medium for creating “a new story of Nanki Shirahama.”

In mythology, the Kinan/Kumano region is the resting place of Susanoo, the god of destruction, the sea, water and death. Since I was a child, I have always imagined Susanoo and other spiritual beings circulating at the bottom of the water, where humans cannot enter. Kinan Art Week was held at the end of November near the winter solstice. As the Dongzhi approached, I felt the balance between day and night becoming unbalanced, with spirits beginning to appear on the surface of the water and the earth, much in the same way that Obon and the New Year are events for the spirits to appear in Japan. When we see the video work, in which < I > is projected, we might recognize a similar sensation.

In addition, the full moon is projected on the video along with the pier, which is a symbol of Nanki Shirahama where the emperor once landed from the sea route. I think the spirits are attracted to those who govern “life and rebirth.” In mythology, the moon is an important symbol of this. It is treated as a celestial figure that controls all kinds of water because of its relationship with high tide, and has been considered a symbol of “female” and “uterus” because of its correlation with the menstrual cycle. On the other hand, it fulfills the role of snake or dragon, a phallic symbol bringing water representing semen to the moon. In Kinan, the long and narrow Kumano Kodo has been worshiped as a kind of snake that connects heaven and earth.

In this context, the elongated object, < I >, serves as a priming and guiding light. Additionally, the interlocking of water and the moon in the video is invisible, yet seemingly also visible, and the small memory of the bottom of the water instinctively accumulates dynamic fluidity projected vertically toward the moon. Am I the only one to feel this?